Updates on the Greenworks bill.

Update: On July 24, 2019 the Massachusetts House unanimous passed the Greenworks  bill to establish a new grant program to help cities and towns confront climate change impacts and to borrow more than $1 billion to pay for it. The bill (H 3987) would create the GreenWorks infrastructure program under the Executive Office of Energy and Environmental Affairs to help communities address the threat of rising seas and floodwaters, and the damage that's already occurred. The bill authorizes the state to borrow $1.3B and to distribute $100M for GreenWorks annually for a decade. It would establish a competitive grant program under which municipalities could apply each year for funding for specific projects. Two or more towns would be able to apply jointly for money to pay for regional resilience efforts. The bill now goes to the Senate for consideration. It is still not clear how the Senate will act on Governor Baker's similar bill (S 10). H3987 includes an ACEC/MA-backed amendment that expands the funding to, "improve the climate resiliency of water infrastructure and water resources."

Update: Coalition Letter Submitted to House Committee on Bonding on 7-3-2019

On July 8, 2019, the House Committee on Bonding, Capital Expenditure and State Assets held a hearing on the Greenworks Bill. ACEC/MA is part of a broad coalition supporting this bill. Above is a link to the coalition letter.  The bill expected to move forward in the House soon.

Background on this bill is below.

(July 2 update: this bill has been reported favorably to the House Committee on Bonding, Capital Expenditures and State Assets, which will hold a hearing on July 8 on this bill) 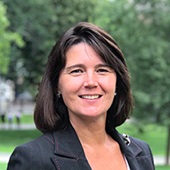 Climate change is a significant and growing concern with wide-ranging impacts, and although the Commonwealth remains a leader in several areas including energy efficiency, there is growing urgency for more aggressive policy.

The GreenWorks proposal has taken shape over the past several months and initial bond legislation was recently filed by my colleague Rep. Tom Golden, House Chair of the Committee on Telecommunications, Utilities and Energy, as H.3846, An Act relative to GreenWorks. You can find the full text of the bill here.

Below, please find an overview of the bond authorizations included in the proposal:

This bill had a hearing before the Joint Committee on Telecommunications, Utilities and Energy on June 18, 2019.

ACEC/MA thanks State Representative Carolyn Dykema (D-Holliston) for sharing this information on  H.3846, An Act relative to GreenWorks. Representative Dykema is the Vice Chair of the Massachusetts Legislature’s Joint Committee on Telecommunications, Utilities and Energy, She can be reached at (617) 722-2680.