State Budget Writers Agree on 2.7% Growth in State Tax Revenues: On December 31, 2018, state budget writers agreed to build their fiscal year 2020 budget plans on the assumption that state tax revenues will grow by 2.7% over FY2019, the current fiscal year. Governor Charlie Baker's budget chief and the leaders of the House and Senate Ways and Means Committees detailed a finalized accord on how much tax revenue the state expects to collect in fiscal year 2020, which begins on July 1. 2019, Budget watchers also upgraded their expectations for tax revenue in FY2019, upping the projected total revenue by $200M, to $28.529B. The estimate of $29.299B in tax revenues for FY2020 amounts to $770M more in revenue than the updated projection for FY2019. The projected growth rate will serve as the basis for Governor Baker's budget, which will by issued on January 23, starting the FY2020 budget process that will continue this spring and summer in the House and Senate.

State Plans Rule-making for New Clean Peak Energy Standard: On December 31, 2018, state energy officials announced that zero megawatt hours are being served by clean peak resources during peak load hours in Massachusetts, and outlined plans for a rule-making process to set the parameters of a new Clean Peak Energy Standard. To establish a baseline and facilitate new clean peak certificates in the new year, an energy law signed by Gov. Charlie Baker in August required the Department of Energy Resources, by Dec. 31, 2018, to determine the current percentage of kilowatt-hour sales to end-use customers from existing clean peak resources during peak load hours. The department also established the minimum standard percentage requirement for retail electricity suppliers in the 2019 compliance year at 0%. However, any clean peak resources with a commercial operation date on or after Jan. 1, 2019 that meets clean peak regulatory standards may be permitted to generate clean peak certificates that can be purchased in compliance year 2019 by retail electricity suppliers for use towards compliance requirements in 2020 or 2021, The department plans an informal stakeholder process to design the Clean Peak Energy Standard, with some early draft proposals preceding the filing of a draft regulation 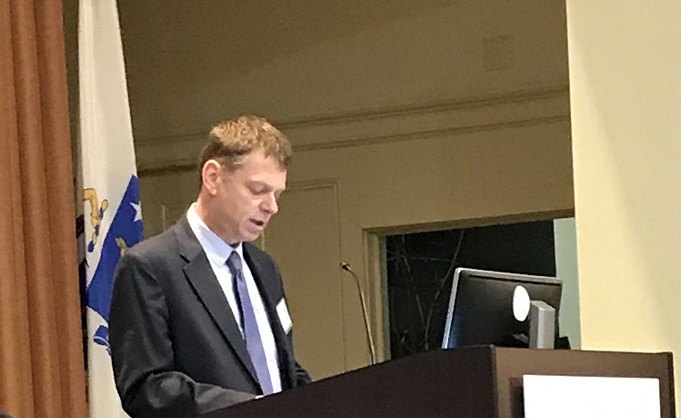 Lessons from the Commission on the Future of Transportation [with thanks to Transportation for Massachusetts as posted on T4MA Blog: on December 21, 2018]

The future of transportation in Massachusetts is multimodal, carbon-neutral, and equitable – or at least should be, according to the panelists at our recent event discussing Choices for Stewardship, the highly-anticipated report released by the Governor’s Commission on the Future of Transportation. The report lays out a vision for mobility in the Commonwealth between today and 2040. (If you missed the event, you can check out a recording of the livestream here!)

Speaking to a standing room-only crowd of more than 400, Commission Chair Steve Kadish and Commission member Ken Kimmell presented on the report recommendations with a particular focus on how we plan for the future in a changing climate. A panel featuring Northampton Mayor David Narkewicz, Braintree Mayor and MassDOT Board Member Joe Sullivan, Boston City Councilor Lydia Edwards, Executive Director of the Tri-State (NY/NJ/CT) Transportation Campaign Nick Sifuentes, and Senior Director of Policy & Public Affairs at Lime Emily Castor Warren shared their insights with moderator Shirley Leung as representatives of the sectors that are key to bringing about the transportation future Massachusetts deserves.

Here’s T4MA's take on three of the most important insights from the panel:

-- It’s about people. The phrase “move people, not vehicles” has long been a mantra for advocates and progressive planners, and many were gratified to hear it as the official policy focus for the Commonwealth moving forward. A people-centric approach to transportation starts with recognizing that, on a fundamental level, better transportation makes everything better. The difference between a good and bad transportation experience means stress, lost wages, missed appointments, and less time with family; for a region over time, it can mean a slowdown in growth and an exacerbation of inequities. Putting people at the center of our transportation planning and focusing on why transportation deeply matters to people, and their quality of life, positions us to make choices that benefit the most people in the most places.

-- Success does exist – and we can build on what’s working. Transportation bright spots do exist throughout the state. More communities are offering bike-share, testing elements of Bus Rapid Transit, or getting smarter on appropriately pricing driving and parking. City and state agencies are working together on improvements like transit signal priority and accelerated bridge improvements. Transportation leaders are active in every community, and many never set foot in the State House. When we look to the future of transportation, we aren’t starting from square one, and we should build on best practices here and in other places – even in the face of attractive but untested technology options that promise to solve many of our problems.

-- We need to break down barriers and old thinking. People are going to more places in more ways than ever before, creating a need for new and creative partnerships with the public and private sectors, and at various levels of government. Some of this is due to new technology – e-scooters, TNCs (transportation network companies), and autonomous vehicles are certainly testing the limits of state regulations and current street design. But larger forces are in play, such as the evolution away from the traditional 9-5 workday, which calls into question the current structure of our commuter rail system and the need for tolls to be a fixed price, all day every day. Future needs for transportation will be flexible, and our policies should be, too.

We’ll be drawing on these lessons in the year ahead as we advocate for better and smarter transportation policies statewide.

ACEC/MA is grateful to Transportation for Massachusetts for the opportunity to co-sponsor this event and to the members of the Commission, whose report includes a set of 18 recommendations and excellent set of background material.

The Commission on the Future of Transportation was established almost a year ago by Governor Baker’s Executive Order No. 579.

The Commission developed 18 recommendations to guide Commonwealth transportation policy “so that Massachusetts can benefit from coming changes – including in demographics, technology, and mobility preferences – and build a future for all of us that is healthy, sustainable, and prosperous.”

Link to report of the Commission – Choices for Stewardship: Recommendations to Meet the Transportation Future:   https://www.mass.gov/orgs/commission-on-the-future-of-transportation. A second volume containing extensive background materials, supporting data, and valuable sources of information accompanies the report.

Transportation and Climate Initiative aims to complete design process before end of 2019.

On 12/18, a coalition of nine Northeast and Mid-Atlantic states, including Massachusetts, and the District of Columbia announced their intent to design a new regional low-carbon transportation policy proposal that would cap and reduce carbon emissions from the combustion of transportation fuels, and invest proceeds from the program into low-carbon and more resilient transportation infrastructure.