Engineering the Future of Rail Service in Greater Boston 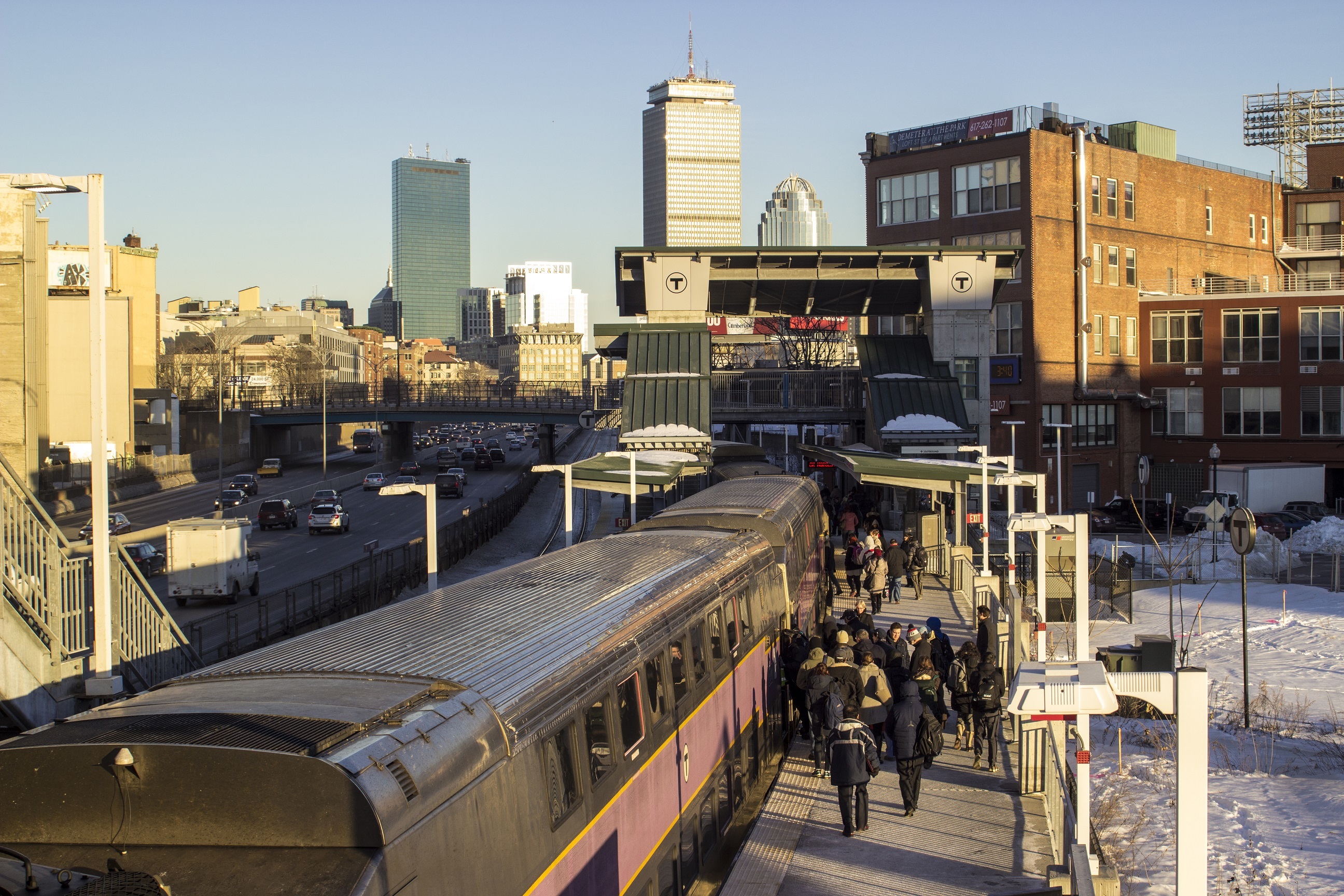 Engineering the Future of Rail Service in Greater Boston

The Massachusetts Bay Transportation Authority (MBTA) is the main transit provider and operator for Greater Boston. It provides heavy rail transit, commuter rail, light rail, trackless trolley, bus and ferry service -- one of two agencies in the United States to provide this range of service. The MBTA serves a region of dense, walkable urban clusters,  including Boston and its inner suburbs, as well as historic mill towns like Lowell, Worcester, Attleborough, and Haverhill. After World War II, Massachusetts neglected many of these cities, in favor of building greenfield highways and encouraging job and housing sprawl. But in the 1980s, frequent traffic congestion, the environmental movement, and a desire to reinvest in cities brought about increasing interest in transit.

Since the 1970s, the core MBTA system has been expanded to the north and to the south. The Green Line Extension to Somerville is under construction and scheduled to open this year. The commuter rail system has also undergone important changes: lines that were all but abandoned in the late 1960s have been reactivated, although in many cases the stations in walkable neighborhoods have been replaced with outlying park-and-ride stations, and lines that were single track have been doubled. Amidst this expansion and change, riders remained dissatisfied, and the system has sustained several high-profile failures. In that context, a group of transit advocates founded TransitMatters, a registered 501c3 advocacy group established in 2015. We draw on a multidisciplinary talent pool of subject matter experts amongst our membership, encompassing policy, engineering, and operational knowledge to advocate for a cohesive vision for transit in Metro Boston and New England as a whole.

Recent history illustrates the existing commuter rail business model has underutilized this enormous asset. Service has long been peak-focused, limiting the utility because missing a train could mean a multiple-hour wait. Fares are also very high, geared to the suburban white collar worker, rather than the lower income service or blue collar workers living in terminal cities like Lawrence and Lowell. That’s where TransitMatters stepped in.

TransitMatters’ founding was motivated by the realization that the MBTA lacked a vision for its own future and its own initiatives were often constrained by the conventional American thinking on transit: that different modes, like rapid transit and commuter rail, served different silos of riders. Consequently, from this phenomenon, the idea that commuter rail could be an attractive and convenient mode for everyone was rare and certainly not official policy.

Toronto, Auckland, and Denver are three cities that have recently transformed their commuter rail systems along these lines or are in the process of doing so. Drawing on lessons learned from these and other national and international best practices and current trends, TransitMatters released a report for a new vision and business model in 2018, “Regional Rail for Metropolitan Boston.” The key premise is that commuter rail should act more like a subway line and provide frequent, affordable service all day to as many riders as possible. This requires achieving five key elements:

In Fall 2019, the MBTA’s Fiscal and Management Control Board (FMCB) approved the beginning of a transition away from the outdated “commuter rail” business model. The board embraced a Regional Rail operating model, centered around frequent all-day service, at least every 15-20 minutes in Boston and the immediate suburbs, with half hourly or hourly service beyond.

While much of Regional Rail is in the realm of policy decisions, it will clearly accelerate the need for the MBTA and the Massachusetts Department of Transportation (MassDOT) to upgrade the system’s infrastructure. From modernizing inaccessible stations to building maintenance facilities for modern electric trains, the initiative of rail transformation is a key opportunity to modernize a system that has long been associated with trains delayed or canceled by equipment failures.

Recommendations for transforming the rail system are informed by two axioms of best practice rail planning. The first, organization before electronics before concrete, means that operational changes and upgrades to fleet and signal technology should be optimized as much as possible. The second, integration between scheduling, infrastructure, and rolling stock, means that infrastructure investments should be dictated by the level of service desired and based on current technology to avoid profligate spending on unnecessary projects.

Achieving this standard requires that MassDOT and the MBTA be open to these methods of engineering, design and construction. Practices in France, Germany, Switzerland, the Netherlands, and Japan should be studied and replicated. For example, rather than undertaking costly expansion of North and South stations, improved switch technology and track reconstruction should be deployed to double capacity of the existing footprint and platforms, as was recently done at the major rail station at Utrecht.

This is important because the costs of building and operating transit in the United States are vastly higher than they should be, well in excess of costs in the rest of the developed world. Traditionally, this has meant that American transit agencies have been forced to compromise on what they build and operate. As we work to decarbonize transport and promote transit usage as an alternative to cars, reducing capital and operating costs will help the MBTA make use of its funds in a more effective way, helping bring everything into a state of good repair and even allowing for crucial capital projects to address capacity where necessary, such as the Red-Blue connector or extending the Orange Line to West Roxbury.

Achieving Regional Rail will require standardized design for capital projects. For instance, improving accessibility at commuter rail stations requires building high-level platforms, which can reduce dwell times at busy stations by as much as 2-3 minutes. Currently, the MBTA does not have a plan to upgrade most stations. As a result, costs vary widely between platform projects. Implementing a standard design for high platforms will lower costs and thus make the essential task of providing total accessibility at all stations faster.

Similarly, electrification will require investment in a significant amount of physical infrastructure beyond the wires: substations and new maintenance and storage facilities. This means that It is important that design and construction of these facilities be informed by best practice in terms of capacity and siting.

As part of these efforts, the MBTA could further partner with municipalities and utilities to develop resilient systems, prevent disruption and combine efforts. To meet Governor Baker’s goal of zero net emissions by 2050, MA and RI utility providers must implement a coherent, unified strategy for electrifying all vehicles. Much focus has been on electric cars, which, while important for this transition, cannot alone meet emissions and carbon reduction goals. A greener Commonwealth is one with a reliable and environmentally sound transit system, including fully electrified Regional Rail.

The most economical and efficient way to achieve this is through overhead catenary electrification. Technologies like battery trains are at present only capable of short distance trips at high frequency, requiring lengthy dwell time to charge, and take more time to get up to speed. Numerous jurisdictions have delivered overhead electrification in a cost-effective manner; Israel, for example, is electrifying its entire network for $53 billion, or $2.2 million per mile, and Danish, Norwegian, and New Zealand projects have achieved a similar cost, as have numerous British projects. Unfortunately, the closest recent electrification projects to Boston - Toronto’s GO and the San Francisco Bay Area’s Caltrain - have had severe cost overruns. But these are outliers; in 2021 dollars, electrification of the Northeast Corridor from New Haven to Boston cost $5.62 million per mile. With disciplined project management and attention to best practice, there is no reason why Boston’s rail transformation cannot achieve the successes of electrified rail systems abroad.

Such a comprehensive strategy should include ways to combine efforts in electric power optimization and rollout. The MBTA already works with telecommunications companies to run trunk fiber optic lines within its right of ways. It may be worth trying to figure out how else MBTA property can be optimized, for instance, installing solar panels at MBTA parking lots and yard facilities.

The phasing for this sort of work will be very important. MassDOT can both help to address long standing issues in transportation equity and environmental justice and demonstrate a commitment to the idea of Regional Rail by adopting these implementation recommendations. Phase One, for example, would implement Regional Rail service on the Providence Line, which already has catenary wires above the rail for most of its length for Amtrak service. In addition to electrifying the MBTA yard in Pawtucket, the southbound platform at Attleboro, and the MBTA track south of Providence, TransitMatters also urges that the short Stoughton Line branch be electrified at the same time to reduce diesel reliability conflicts as much as possible and prepare the line for South Coast Rail Phase II.

Phase One of Regional Rail will also modernize the Fairmount Line, a short line serving lower income, minority-majority communities in Dorchester and Mattapan. For many years these neighborhoods have had diesel trains pass through spreading pollution (along with the cars on Interstate 93), but had no passenger service. Years of activism by the community resulted in service beginning about a decade ago, but service remains infrequent and subject to delays when locomotives are needed on other lines. The Fitchburg, Middleborough/Lakeville, Lowell, Haverhill and Newburyport/Rockport lines also serve Gateway Cities or neighborhoods that have been disadvantaged. Additional “infill” stations will add connectivity to dense areas that commuter rail currently passes. Fare integration with the bus and rapid transit system makes service more accessible to lower income riders, and will help address environmental justice issues.

The Urgency of Regional Rail

The 2019 decision to build a more equitable and reliable rail system marked a key turning point for a network that for too long relied on a mid-20th century business model that did not consider riders who were not 9-to-5 suburban higher-income commuters - and didn’t even serve those riders well, due to unreliable diesel equipment and poor service quality. The A&E community has a key role to play in Regional Rail by drawing on successful international projects to build the best regional rail system possible. The future of our cities, economy, and environment depend on getting this right.